Your Are Here → Home → Soul Searching → The Church of The Sea: Praise and Worship Through the Ritual of Surfing

The Church of The Sea: Praise and Worship Through the Ritual of Surfing 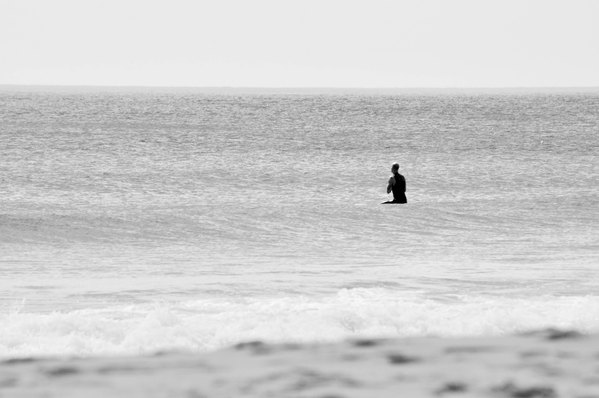 “The happiest man is he who learns from nature the lesson of worship.”
-Ralph Waldo Emerson

“When one loses the deep intimate relationship with nature, then temples, mosques and churches become important.” -Jiddu Krishnamurti

Human beings as a species have been steadily losing their connection with nature for quite some time now, most extremely during the advent of the industrial revolution and only quickening within the perpetuation of the industrial age. Through the use of fossil fuels and industry, we have been able to “progress” on a multitude of levels, but not without terrifying consequences that appear to outweigh the value of that very progress. Enormous damaging impacts to the ecological system of the planet, coupled with unnatural and unsustainable population growth, have landed the human being in a precarious situation as a species. If the repercussions due to our assault on nature and her resources weren’t enough, we also have the issues of fraudulent political systems which adhere to the will of the global elite with little regard for the citizens they are supposed to serve. The world over is suffering from financial instability, poverty, starvation, poor health care and religious unrest and strife. We truly are living in a crucial moment in human history, a change of course is absolutely necessary for our survival. If this isn’t enough to ponder and feel shaken up about, consider the ruinous consequence it’s all had on our personal and collective psyche.

I feel at the base level many of our problems as a species stem from the illusion that we stand separate from nature. Instead of acknowledging that we are part and parcel of a large working organism, Planet Earth, we have falsely pulled ourselves out of the system and taken on the role of a cancerous cell. Now I’m treading into some dark and gloomy territory with what I’ve said so far, but I need to lay a foundation as I prepare to talk about my own personal experiences with feeling disconnected from nature and finding a place where I could once again make that inherent connection.

As a child I loved to play outside. I enjoyed being outside so much that being indoors was almost torturous, although I did appreciate the occasional Sunday retreat of science fiction and martial arts movies or playing in the basement with my toys. Movies and toys aside, I could normally be found in the woods clothed in camouflage fatigues, running or riding bikes through trails, wading in the small streams that flowed, partaking in all of this while playing with my neighborhood friends. Over time our wooded play lands slowly disappeared, making way for new homes and large generic shopping plazas. By the time all the “woods” seemed to have vanished, I started to skateboard. I found a use for my emerging concrete and asphalt surroundings. If they were going to take our woods away, then we would turn their concrete landscapes designed for commerce into our new medium of fun and creativity. The devout followers of the system never appreciated skateboarding for this very reason, we learned to turn their monuments of business into our personal canvas of thrilling, shreddable delights. Skateboarding was the ultimate “Fuck You” to the powers that be, a middle finger to the status quo delivered via the sound of grinding trucks and sliding wheels from the suburban youth in a small town in New Jersey.

With my own personal disconnect from nature, I felt a void which I had no way to express or understand at the time. Sometimes I would feel sad or depressed, something just wasn’t right, but I never could pinpoint nor communicate what it was. Then at 11 years old I was introduced to the world of surfing and from my first session I was hooked. I was a wave addict, continually harassing my mom for rides to the beach, or orchestrating rides with friends whose parents were taking them to the beach. Eventually, when we burned our poor parents out, we resorted to taking the bus and then riding our bikes for a few miles to the beach.

In surfing and being in the ocean I had found the perfect interface between the wonders of nature and exhilarating excitement I felt while riding a skateboard. Surfing became my saving grace and passion, while bringing me once again in close connection with nature. Throughout my life, the pursuit of the joys of wave riding would bestow upon me uncountable blessings, as well as both simple and complex personal realizations. It would take time for these realizations to bear fruit as I quickly became trapped in the weeds of modern surf culture, which sadly seemed more interested in turning a deeply meaningful path into a commodity.

As I became more engrossed in the world of surfing, I was naturally pulled into the fascination of watching professional surfing, and quickly jumped into amateur competition after only three months of surfing. In my first contest I took second place. The feeling of accomplishment and pride was so strong I became a dedicated competitor, which helped to improve my surfing immensely, but would pull me away from the innocence and pure elation I felt when I first began surfing. Surfing started to be defined by performance, mastering maneuvers, contest placings, paddling tactics, amassing sponsors, and just an overall vibration of aggressive competition. This approach to surfing had lasted nearly twenty years for me. Although I have gratitude for this part of my surfing experience and had a great time during it, I feel it shrouded the true beauty of what I felt when I first entered the water.

In addition to being drawn to nature through the path of surfing, I have always had an interest in spirituality, theology, metaphysics and esoteric thought. After I graduated high school, I took a break from surfing, disillusioned by much of what I was experiencing with sponsors and in competition. I moved away from the ocean and spent some time in a Hare Krsna temple in Brooklyn, attempting to live the life of a celibate monk. I would awaken at 3 a.m., take cold showers, partake in the morning rituals and worship, then practice mantra meditation. In the afternoons, I would go out on the lower east side of Manhattan with other monks from the temple. We would distribute vegetarian food to the homeless and anyone who wanted to eat. Then we would absorb ourselves in chanting loudly throughout the streets with various Indian instruments; possibly selling or giving away some books on Yoga and meditation.  Nights would end with a lecture on the Bhagavad Gita and more Kirtan (congregational musical chanting). It was a simple life, but a difficult one to uphold as a 17 year old. I saw beautiful women everyday on the streets which made being celibate an agonizing experience, not to mention I missed the ocean and surfing immensely. Sometimes I would sneak away with my skateboard and skate the ledges at the Brooklyn Academy of Music, but it was a short-lived diversion from my desire to catch some waves. I flip flopped in and out of the temple for a few years, finally realizing the lifestyle wasn’t for me.

The following 15 years were a roller coaster ride: skateboarding, surfing, working in the “action sports” industry and touring in a punk rock band. Some of it was good, some of it was bad, overall I have a lot of great memories and experienced some exciting adventures; but at the end of that ride, I was burnt out and depleted. I left my spiritual quest behind on an immense ego trip and ended up feeling totally deflated.

I began once again seeking, an exploration into the ultimate truth of our human existence. Leaving almost no stone unturned and after gaining a great amount of knowledge from various cultures and paths, I felt as if I was left with very little practical wisdom. Until one day I had an overwhelming sense of relief, the admittance that after all the searching and questioning, I did not know. “I do not know” became my mantra for some time, and it was as if a huge weight was lifted off my shoulders. For once in my life it felt okay to let go and embrace uncertainty. I’ve always intuitively know there is an energy or power greater than humanity, but trying to define it became a futile task. Resting into the acceptance that I didn’t have to label or define it, but simply experience it, was a liberating conclusion.

Surfing started to take on a new meaning for me. Not simply an exhilarating pastime or a way to connect with nature, it also began to take shape as my spiritual practice. I had come full circle to return to that which had always spoke the deepest truths to me. Sadly, for many years, I did not have the eyes to see or the ears to hear the mysteries that were revealed to me through surfing, and still now I become blinded by ego. Yet these days, riding waves has a fresh feeling and  emancipating element so powerful it’s as if oftentimes I’m directly connected to the source of all that is.

Surfing has many ritualistic aspects to it like ancient religious rites and practices, yet surfing with it’s ritual component remains fluid, spontaneous, and continuously magical. The ocean is now my place of communion with my natural surroundings and my place of worship. The ocean teaches reverence and respect for the natural world, the cyclical nature of life, gratitude for the boons given to us by our planet, and infinite insights into the human experience.

The photos below by Chris Kinsel were taken on a small day at my home break in New Jersey. From the boardwalk you couldn’t see any waves breaking, it appeared flat, but as you walked down the beach perfect little knee- to waist-high peelers were revealed breaking on the sandbar. The water was crystal clear and there were big stripers to be seen swimming beneath me as I cruised across the waves. It was a relaxing, cleansing, and meditative session.

Another exquisite day of wave-riding praise in the temple of the sea. 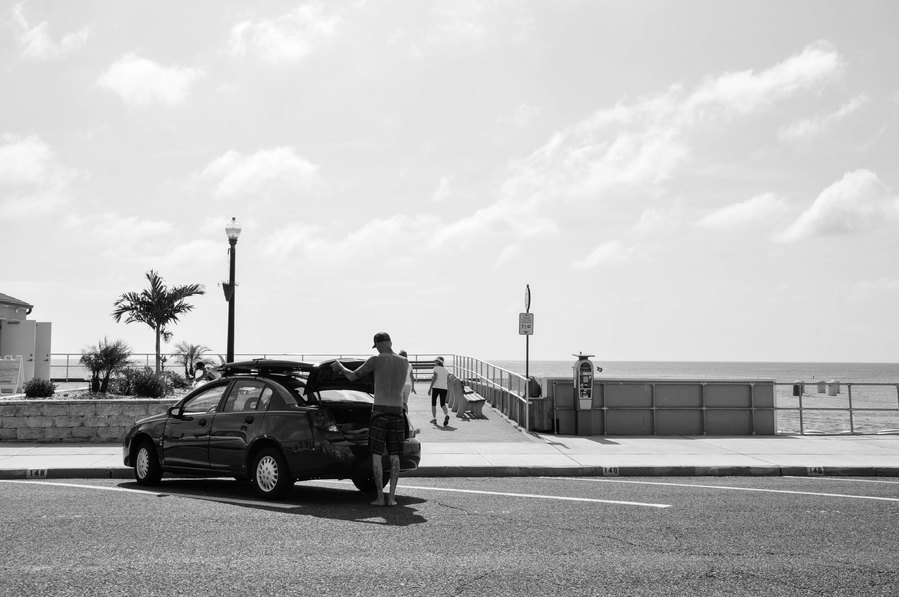 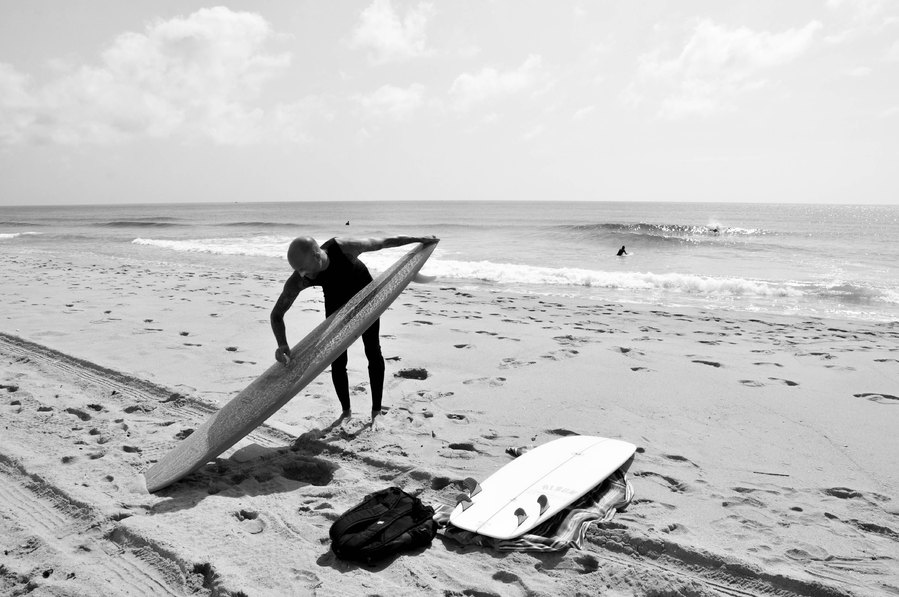 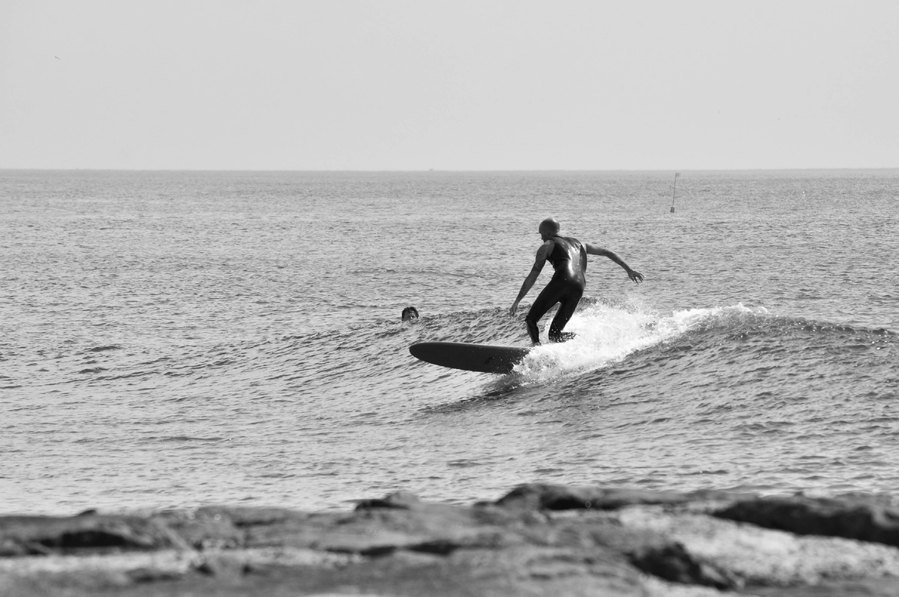 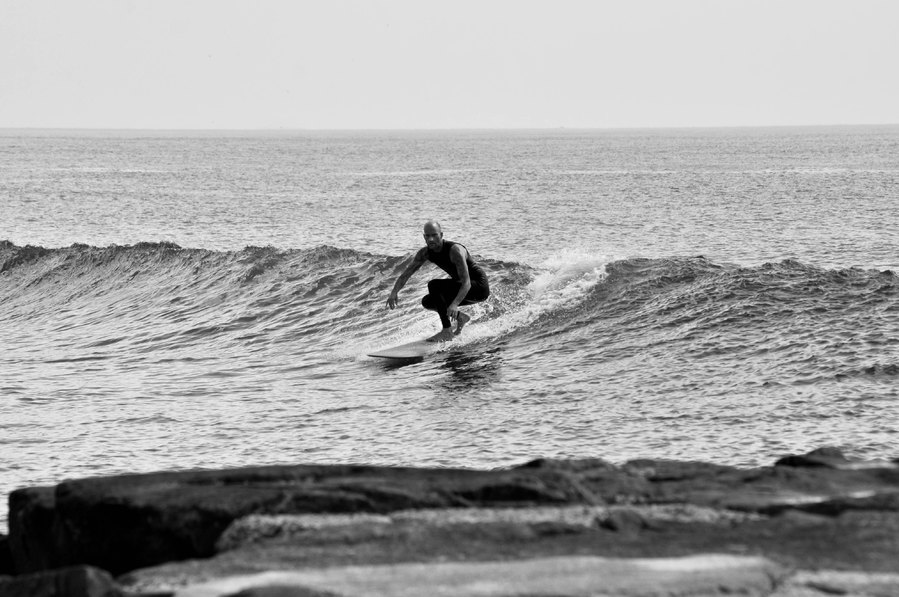 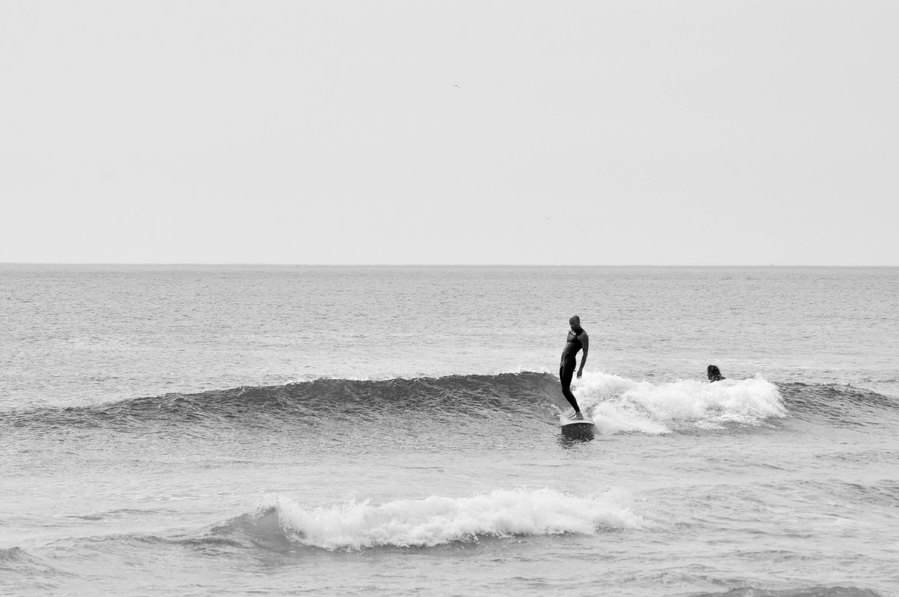 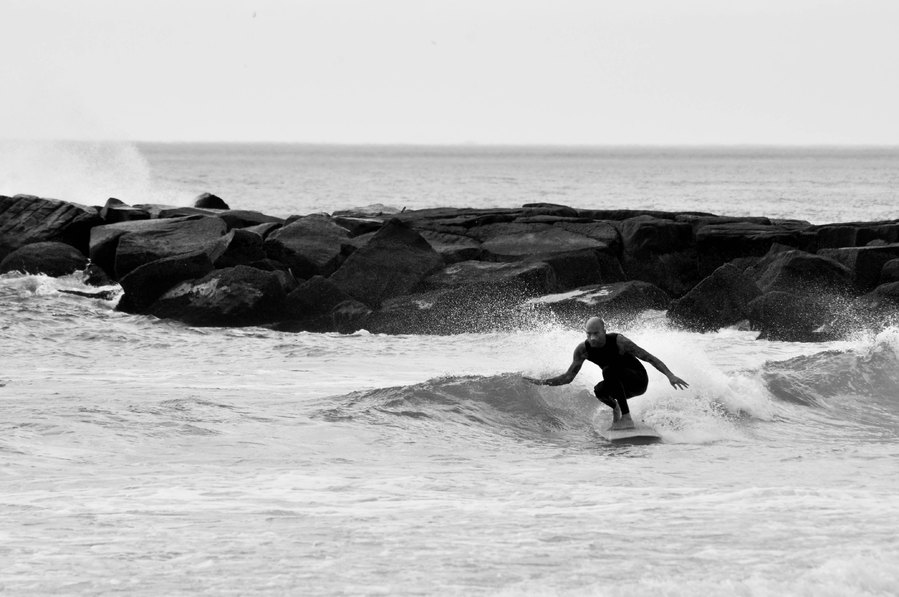 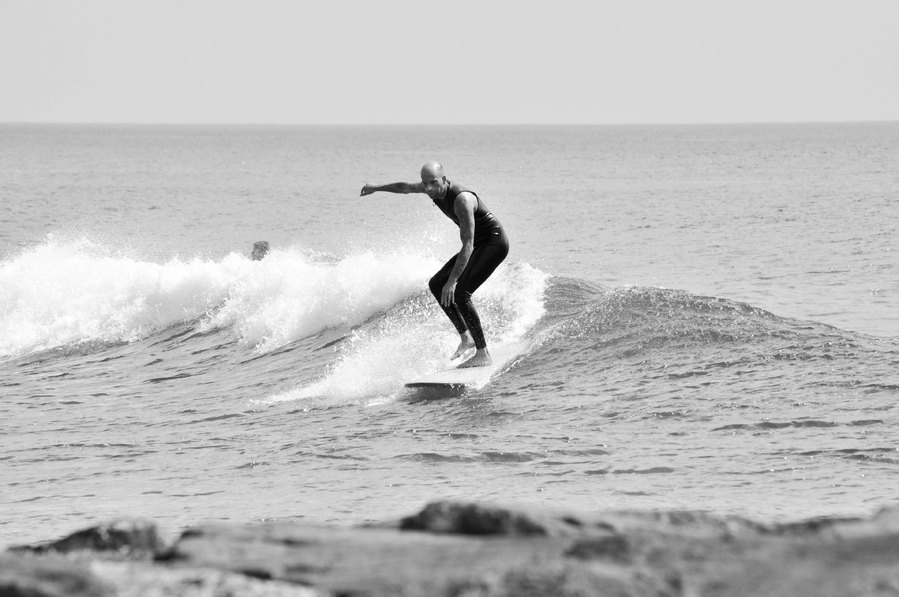 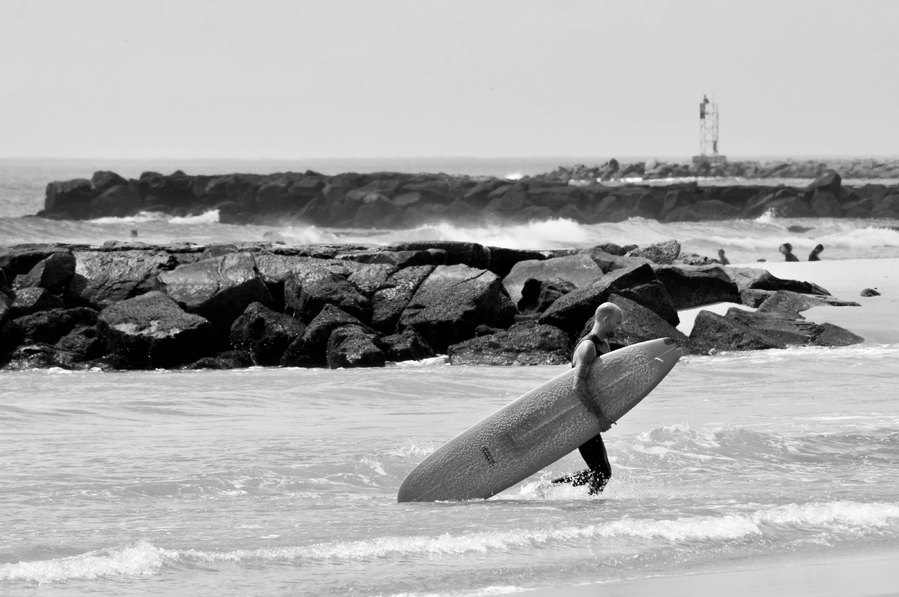 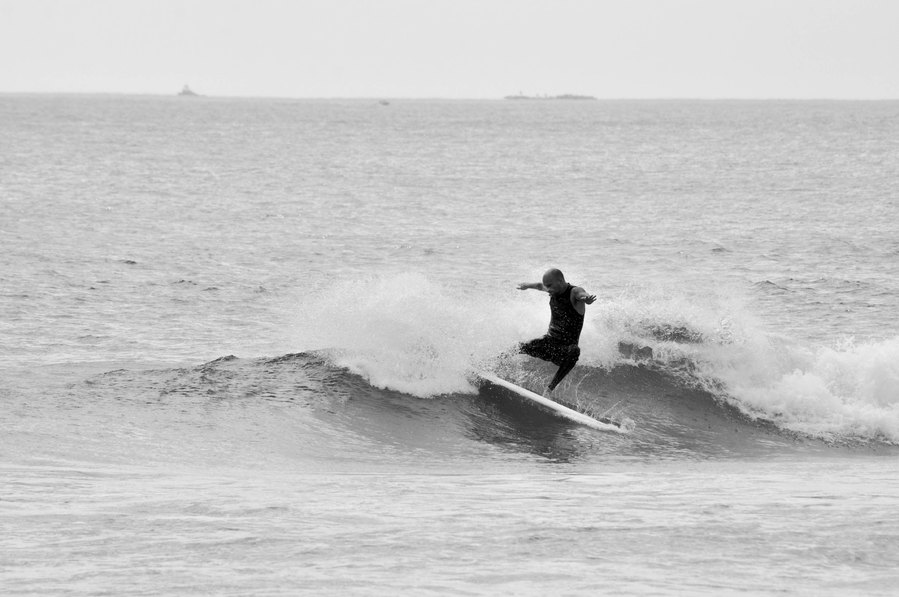 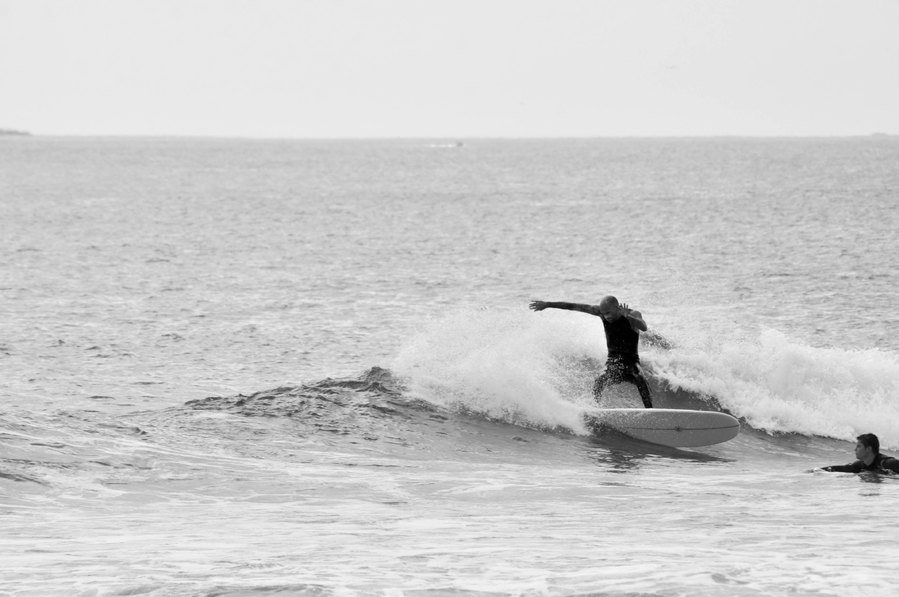 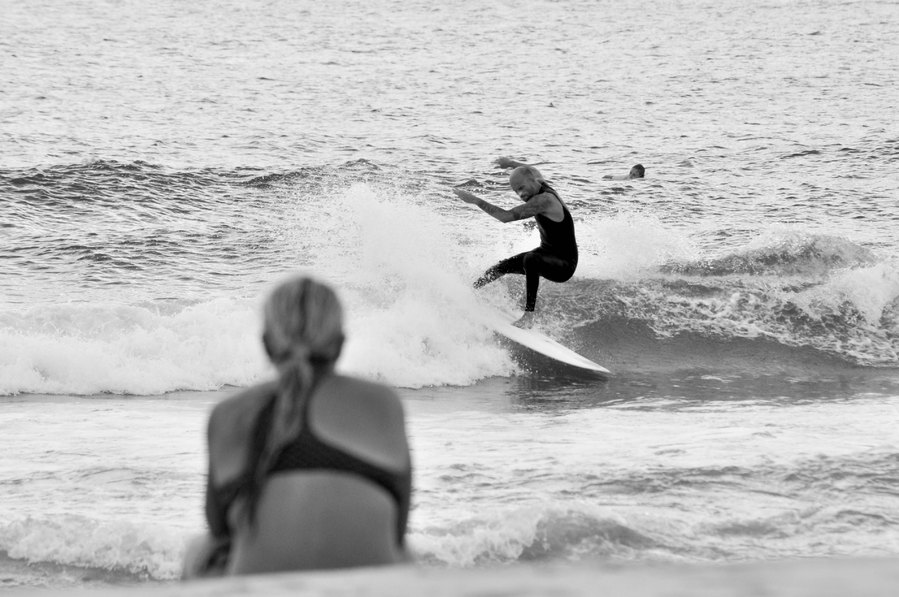 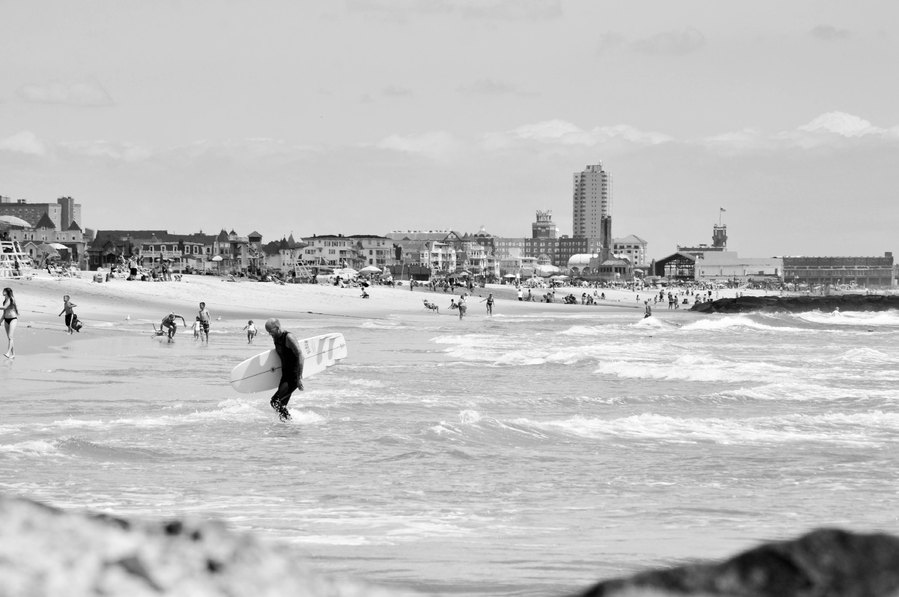