Your Are Here → Home → Destinations → Surfing the Persian Gulf? 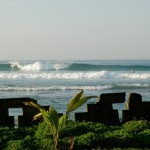 The United Arab Emirates is one of the more progressive countries in the Middle East including the up and coming metropolis of Dubai as well as Abu Dhabi.  While they have been working hard to turn themselves into global finance centers they have also become a holiday destination for many.  Dubai itself has became an interesting oasis growing out of the desert containing the world’s tallest building, huge man-made islands and apparently an indoor ski slope (the energy required for this must be pretty intense.

I had the pleasure of a brief layover in Abu Dhabi a few years back and was surprised by the progessiveness of the city-state.  Sure, camel racing replaced CNN on the airport television sets and, yes, it was really, really hot outside.  But it was a magnificent destination with great accommodations and warm people.

On top of all that, apparently it is now also a surf destination?  A South African, Carl de Villiers has opened a surf shop in Dubai called Surf Arabia.  Dubai is on the Persian Gulf side of the Peninsula, but judging from the photos on the Surf Arabia website  there is a swell that makes its way in there from time to time.

In any event, we applaud Carl for breaking new ground and if you feel yourself on the cutting edge of the surf world… I think it would be an interesting trip to make.  In fact, if you fly Emirates Air you could make an interesting circuit of Dubai, The Maldives, Sri Lanka and India.  Ahh, wishful thinking again…  In any event, if anyone has surfed the UAE, we would love to see some photos and hear what it was like in the comments below.

Christian is a former software executive turned bum surfer. Following a decade in the high paced high-tech industry as a founder, executive and attorney he eventually settled in California where you can find him surfing the breaks from Los Angeles to Marin County. Christian has traveled to over 30 countries, studies eastern philosophy and, in addition to riding short and long boards, is also a blue water sailor.