Your Are Here → Home → Interviews → Living in Sealand: Wave Sliding in Denmark with Mathias Rosendal

Living in Sealand: Wave Sliding in Denmark with Mathias Rosendal 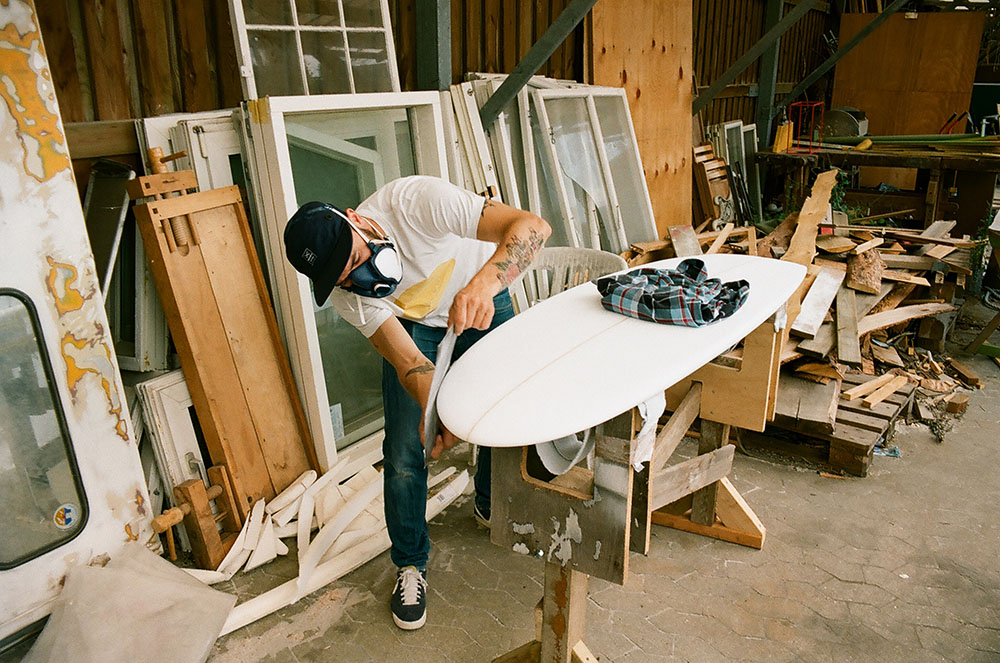 “I really hope we can maintain the fun factor, where people just get out there in shitty waves and shitty weather and have some good old fun regardless, despite and because of our small pond conditions.”   – Mathias Rosendal

I initially became interested in the emerging surf scenes of Northern Europe over the last few years, feeling a kinship to the surfers who brave the harsh weather conditions to experience the exhilaration of riding waves. I’ve also made friends going back to the early 1990s with people living in these northern regions of Europe, and for so long they swore to me there was no surfing. So when I finally heard there were actual waves and people riding them, it sparked a need to know what it was all about.

Most recently I became turned onto what was happening in Denmark while cruising the internet and have been keeping watch from afar ever since.

To say Denmark is the last place you think of when it comes to surfing seems to be a bit inaccurate. It’s most likely the place you never think of when it comes to surfing. Although many surfers are unaware of it, there is a flowering surf scene that is currently unfolding in this sovereign state in Northern Europe. The locals embrace the DIY ethic of backyard shaping, handcrafting their own unique equipment that can work well in the fickle surf conditions that are granted them. As their surf culture is relatively new, there is also a wonderful level of purity and lack of contamination by the toxins sometimes spewed by the surf industry at large.

Although I’ve seen photos of waves in Denmark that resemble some of the best conditions I get at home here in New Jersey during our winter season, it seems oftentimes they are dealing with crummy and mushy dribble. While the waves wouldn’t be ranked as top quality, the surfers have a stoke and love for surfing that is downright inspiring. I even feel like they may be being a bit modest about their conditions, possibly trying to keep fellow wave hunters off their local catch.

I touched base with Mathias Rosendal, who recently helped create a short film about surfing in Denmark called “Living in Sealand”. Mathis is also a surfer, shaper, artist, musician and one of the founders of Denmark based surf brand OH DAWN.

Read on to get a glimpse into the unfolding world of surf in Denmark. 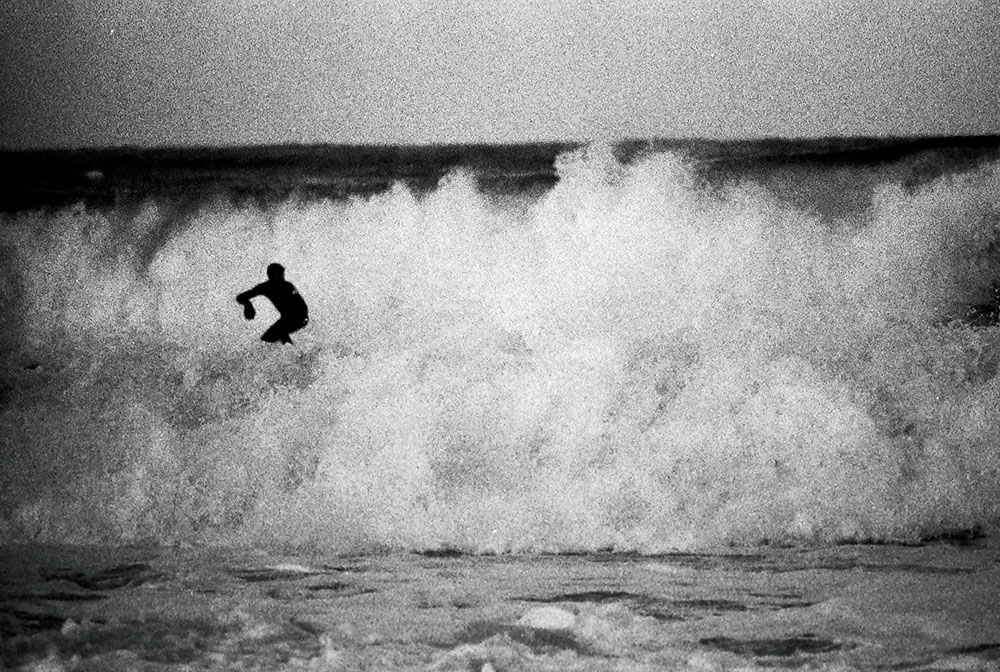 Zappo: When did you start surfing, what was your first surfboard, and do you remember your experience of riding your first wave?

Rosendal: My family and I used to go to France for the holidays every year when I was growing up. My brother and I used to play all day in the shore break. I think I was about 18 years old when I bought my first board. You know, one of those ugly looking plastic Malibus. I grew up skateboarding but my dad, who used to build boards for the local windsurfers back in the day, regularly took my brother and I to the beach and I guess that’s how the obsession started. 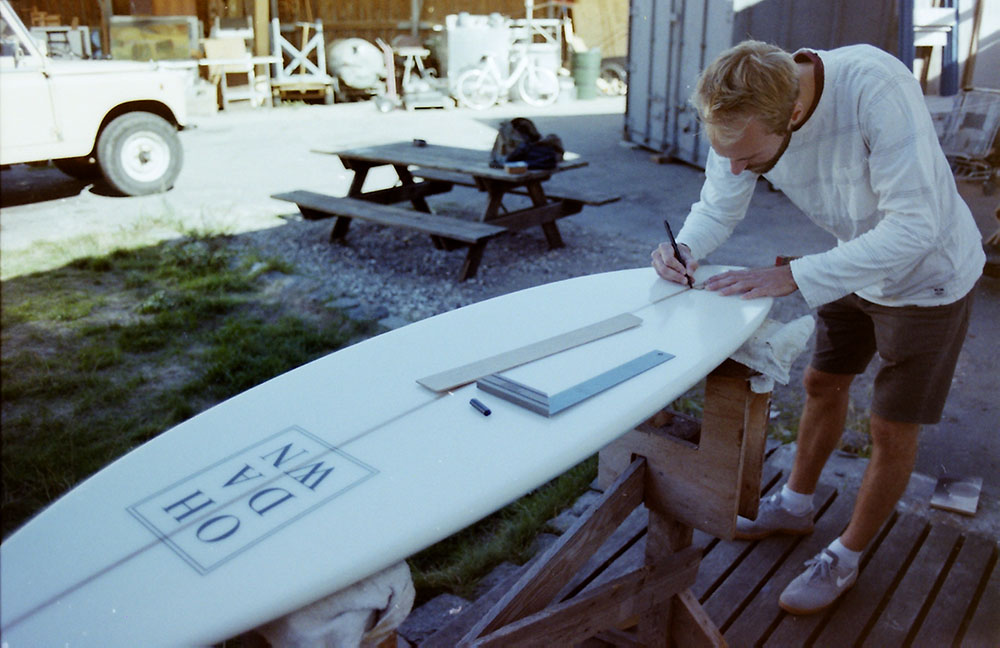 Zappo: For the majority of the worldwide surf community, I imagine Denmark is not a place that comes to mind when thinking of surf destinations. Please describe to me surfing in Denmark and what the surf scene is like?

Rosendal: Yeah, Denmark is definitely not the first thing that comes to mind when you think about surfing. We haven’t really got any surrounding oceans here, so groundswell is a really rare and short lasting dish here. Most days it’s wind swell, so all the spots that get rideable surf are somewhere sheltered from the given wind direction. But we can get fairly decent surf once in a while. It’s almost always small, but just enough to have a good amount of fun! I guess that’s something you learn from surfing here, to have fun with it and get the most out of the conditions. The surf scene here is really small but rapidly growing, bringing more and more stoked locals to the lineups. 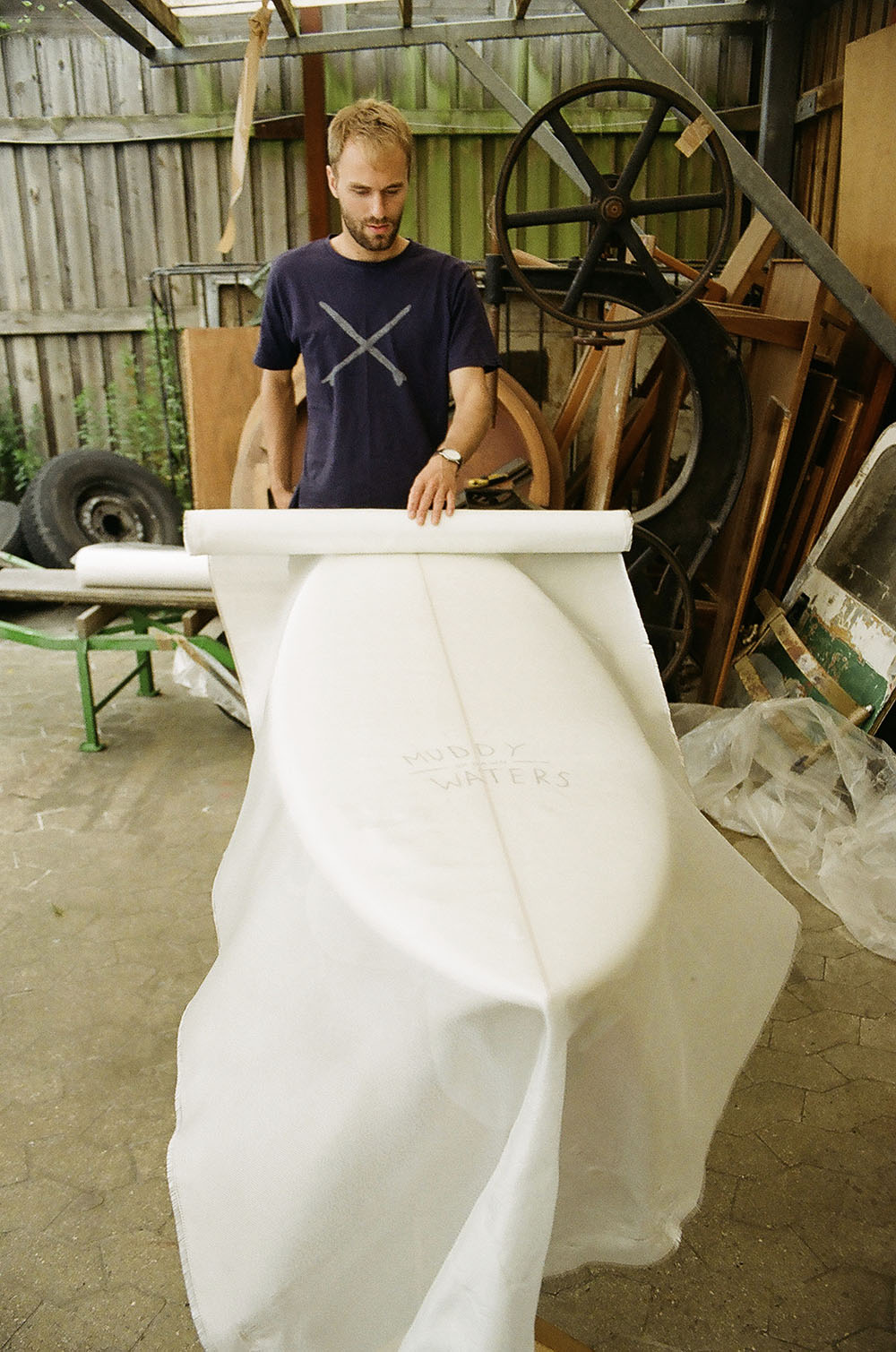 Zappo: A pretty straightforward and simple question: what are the surf conditions like in Denmark, and how do they vary with each season?

Rosendal: Well, it’s cold most of the year, but the summers can get ok. Just warm enough for 3mm suits and for the resin to harden. Fall, winter and spring are the best seasons as the weather’s the worst and bad weather means waves here. In the winter, the air temp. is around 0 degrees celsius or less and the water temp. around 1-3 degrees C. So we use our heavy 6mm neoprene quite a lot. 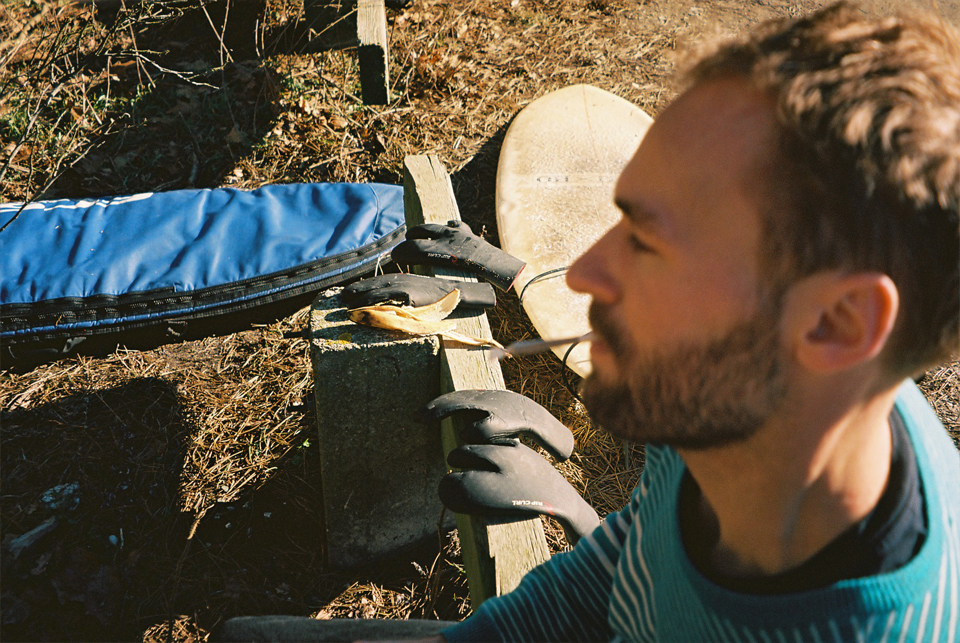 Zappo: With a younger surf culture like your own, it seems there is a bit more purity in the pursuit of riding waves and the creation of surf-craft. You embrace the DIY ethos of the early surf culture in the United States, when people had no choice but to build their own boards and be involved in every level of creation of their surfing adventures. Tell me a bit about the board building in Denmark, how it’s progressing, and what shapes you find work best in your conditions?

Rosendal: Yeah, I suppose you’re right! We actually started building boards because we had a hard time finding the right equipment for our waves. It just made it easier with the old man teaching us how to work with the resin and fiberglass. Now it seems that you can buy almost every kind of craft anywhere, especially now with the whole alternative craze. But I still enjoy my own crooked shapes the most. The waves here are mostly pretty weak, flat and bumpy. My favorite board these days is my homemade 5’2″ x 20″ x 2.25″ quad. It’s pretty flat and thinned out with short board rails. It has a hull entry, single to double concave, with a vee off the tail. Haha, yeah I know – that’s pretty much every design feature at once. I’m far from a specialist, but I feel like the low volume mixed with a wider and flatter planing surface gets the board going fast while still maintaining the ability to bury the rails. The hull entry feels nice and smooth as it engages with the bumpy surface, and the single to double through the quads just generates huge amounts of speed. But, we at OH DAWN make all kinds of experimental shapes and I really enjoy the process. Plus it keeps us “surfing” when it’s flat. 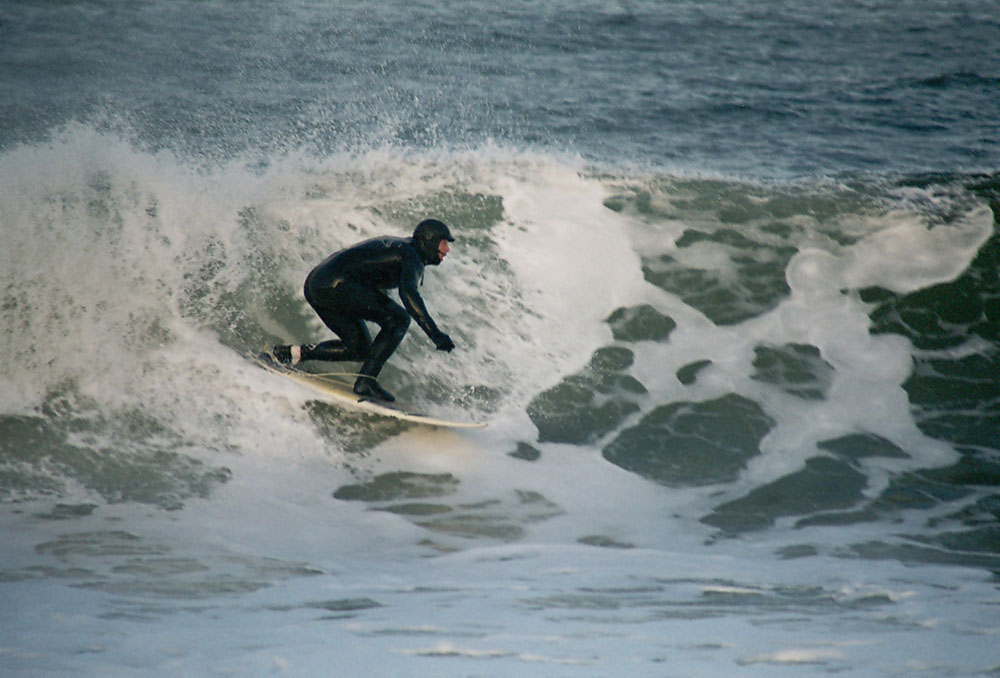 Zappo: Tell me about the recent film short on the Denmark surf scene “Living in Sealand” and what part you played in the film?

Rosendal: “Living In Sealand” is a short film series about the local surf scene here and hopefully a bit on how it differs from other places too. It’s a project that I’m doing under the OH DAWN label. First episode is called “Surfbored” and it’s mainly about the OH DAWN crew backyard shaping here in Copenhagen and a brief introduction to “Sea-land” (Zealand). The coming episodes will feature different local surfers from around here, each doing their thing, while describing different aspects of Danish/Scandinavian surf culture. 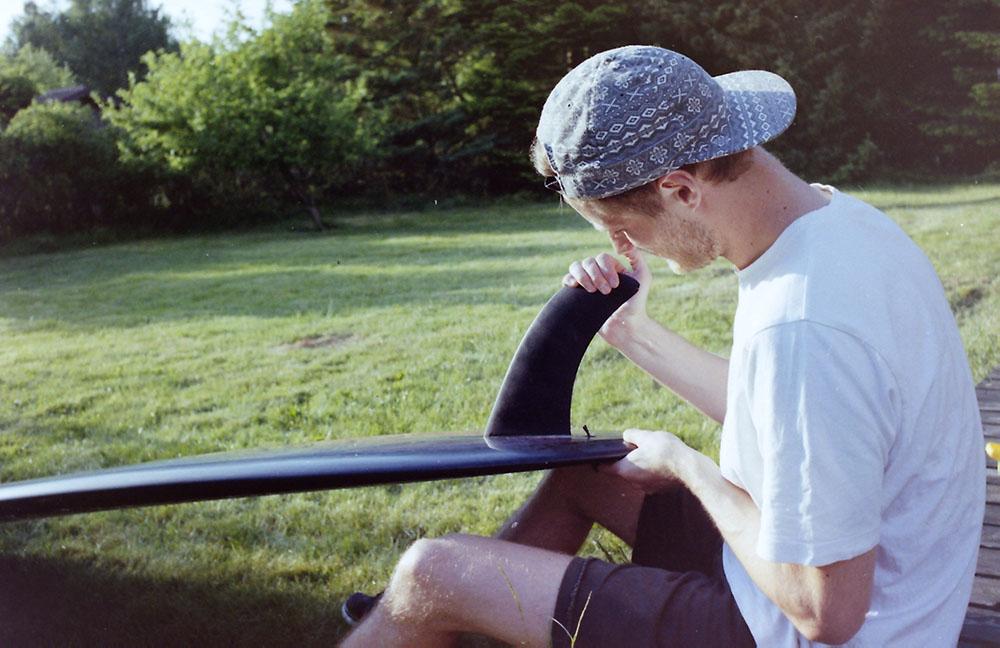 Zappo: I first became aware of surfing in Denmark when I came across the brand “OH DAWN”, tell me a bit about the brand, how it came it being, the philosophy behind it and what your role is in relation to the brand?

Rosendal: OH DAWN is a Copenhagen-based clothing label founded by my friend Bo, my brother Simon and me. We actually started out five years ago, playing around with surfboard and skateboard shaping, documenting our surfing and posting all of it on our website. We then got invited to do a small exhibition at a local gallery. We screen printed some t-shirts and threw our boards and pictures on the wall. To our big surprise we actually ended up selling all of it and the dream kind of started to take shape. Since then we’ve tried to keep ourselves busy producing all kinds of stuff and having as much fun with it as possible. Later on the whole clothing part of it came to life, as we kind of felt we needed a surf brand that spoke to our taste, lifestyle, culture, heritage and the diversity between Copenhagen and the raw Scandinavian seascape. We are surfers but we couldn’t really see ourselves as part of that big business “surf brand” stereotype. So we decided to do our own thing, to target likeminded people with a passion for design, surfing, DIY culture, creativity and high quality. We do everything from design, to marketing, to sales ourselves. So it’s just us. Maybe we could do better on some levels of running a business. But we do things the way we like and think they should be done. We pick up knowledge as we go along. 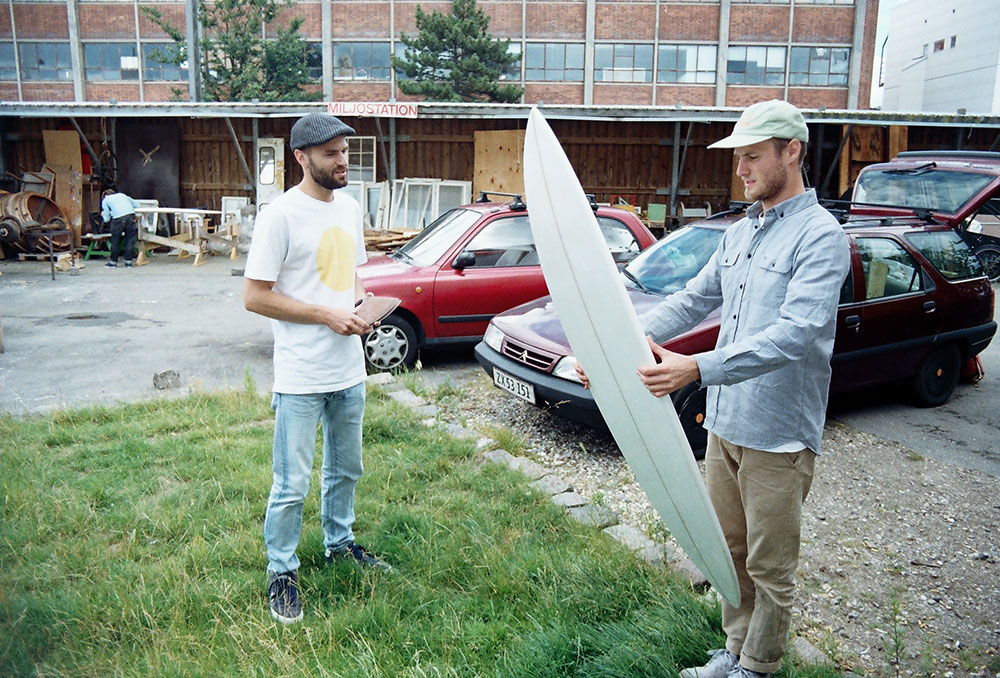 Zappo: Aside from surfing, what are some other creative activities that you like to indulge in?

Rosendal: I play quite a lot of guitar and I draw a lot as well. I’ve always played guitar, although I wish I was a drummer.

Zappo: Describe to me your last surf session?

Rosendal: That was a couple of weeks ago as it’s getting harder to squeeze an after-work session in as the days get shorter here. It was just an hour south of Copenhagen, near an old deserted quarry. We actually got lucky and caught some pretty clean chest high swell with a dying wind. Was a bit mushy, but it was really fun on the right boards and still not too cold either. 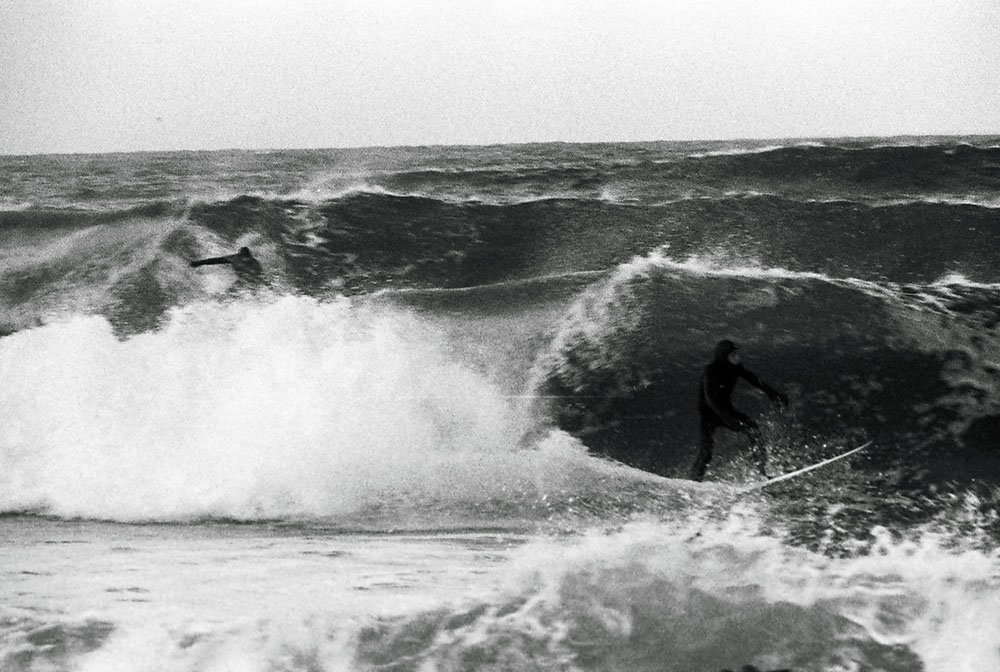 Zappo: How do you see the surf culture of Denmark progressing and what are your personal hopes for it?

Rosendal: The surf scene here is rapidly growing and that’s a good thing. There’s still plenty of room for everyone in the water, but just enough surfers to have a community and for the culture to evolve. I really hope we can maintain the fun factor, where people just get out there in shitty waves and shitty weather and have some good old fun regardless, despite and because of our small pond conditions.