Your Are Here → Home → Film → BIGFOOT COUNTRY: The Adventures of Woody and the Blue Ox

BIGFOOT COUNTRY: The Adventures of Woody and the Blue Ox 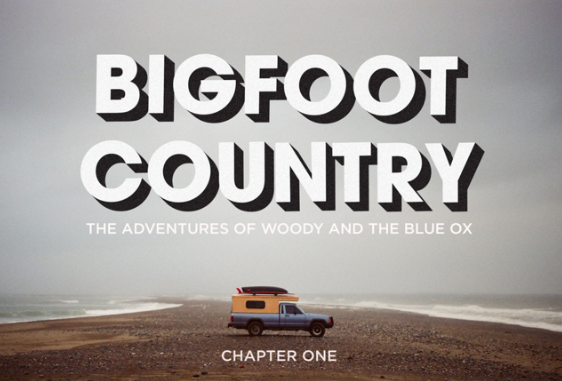 “The only life worth living is the adventurous life. Of such a life the dominant characteristic is that it is unafraid. It is unafraid of what other people think…It does not adapt either its pace or its objectives to the pace and objectives of its neighbors. It thinks its own thoughts, it reads its own books. It develops its own hobbies, and it is governed by its own conscience. The herd may graze where it pleases or stampede where it pleases, but he who lives the adventurous life will remain unafraid when he finds himself alone.”
― Raymond B. Fosdick

I first got turned onto Trevor Gordon’s surfing a few years back when a friend sent me a link to some footage of him surfing his home break in Rincon, CA. Trevor’s surfing is unlike many of the big name professional surfers traveling the globe competing on the ASP world tour. Where the competitive status quo approach is that of packing as many big turns into the smallest space possible, blasting huge airs, and appears overall aesthetically aggressive in nature; Gordon takes a different route.

Laid back, creamy smooth, and pleasingly poised are a few adjectives I would use to describe Mr. Gordon’s surfing technique and that is why it’s so appealing to me. Where many surfers seem as if they are fighting against the wave, or trying to beat it to a pulp, Trevor’s surfing is more akin to a dance between what the surfer wants to do on a wave and what the wave wills from the surfer. That is why his wave riding is a beautiful blend of two streams, that of the high performance surfing of the present age and the soulful grace of the past.

After creating a DIY truck bed camper, Gordon set out on a mission to find surf and adventure in the heart of Cascadia’s Bigfoot Country.

Here is the first chapter of his latest escapades.