Alaska appears naturally rough, rugged, and wild, while possessing a beauty that is serene and majestic. Although the largest U.S. state boasts 34,000 miles of tidal shoreline, I imagine it may not be a place many of us think of for an amazing surf adventure. But there is surely adventure to be had.

The Alaskan landscape is likened to our imagination’s most breathtaking snow-swept dreams: glaciers, snow capped mountains, innumerable rivers and lakes, and a few active volcanos. Alaska is also the home to some serious wildlife: various bears, caribou, moose, bison, and the famed orca or “killer whale”.

If all that doesn’t pique your venturesome spirit, well, Alaska has waves. In fact, there are many empty perfect waves to be had if you can brave the elements and conquer the cold.

The upcoming film, “Alaska Sessions”, serves to bring us on a cinematographic surfing journey of Alaska as we follow Mike McCune, his sea fairing vessel, the Milo, and a few friends along the gulf of Alaska, as they search for undiscovered waves, wonder, and the soulful experience that is found riding waves.

Read on for an interview with “Alaska Sessions” filmmaker, Fred Dickerson. 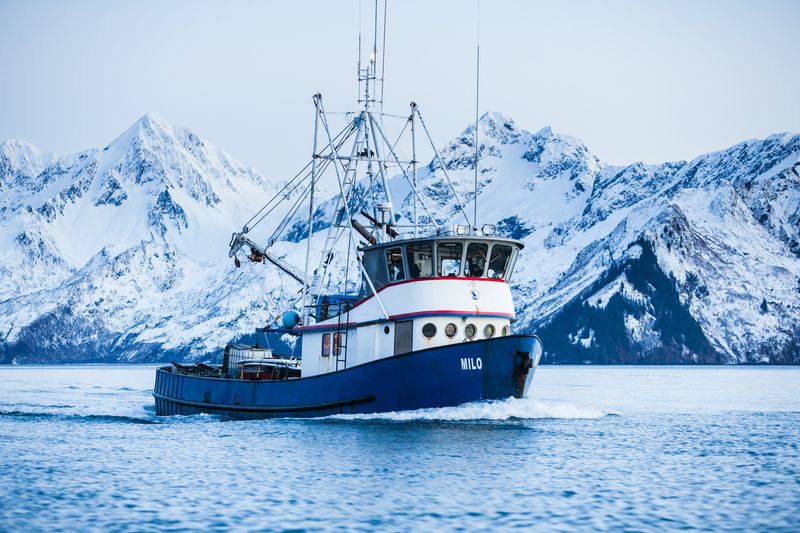 What was the initial impetus for the creation of the Alaska Sessions and how did the overall vision change over time?

I was in Homer, Alaska visiting family during the summer. I had heard about this surf trip that my brother was going on with his surfing buddy, Mike. They were bringing up a boat that Mike originally bought in San Francisco. This was the last leg of the journey, and they planned to surf their way up the coast in the middle of winter. I happened to meet Mike at my brother’s house and he asked me if I was interested in filming it. It sounded tempting, but I didn’t think much would come of it at the time.

Then when I got back to Australia my co-worker (now co-producer), Matt, and I started talking more about the idea. We were working on some smaller film projects together and started to get excited about the idea of doing something like this: a story about Alaskans going on an adventure that hadn’t really been done before. We realized it was actually an amazing opportunity to film a real story happening in a wild and beautiful place.

For a few months we worked on getting some sort of funding to buy the right equipment for this sort of surf film. But it seemed like no one with the money was quite as excited as us, so Matt actually just ended up buying the bare essentials we needed.

Our initial vision was to be able to tell a story about these guys. It is a surf film, yes, but not like most surf films. The scenery is definitely more spectacular than the surfing. These guys are’t pulling airs, but they are loving surfing enough to do it at 10 below. That’s cooler than throwing down a 360, right? This kind of vision –to tell their story- meant that we just tried to capture their journey as it happened…followed by months of editing of course.

I don’t know that the vision changed for us, but as we realized what a great story this is coupled with some great characters we definitely ended up putting a lot more energy into it than we had planned to in the beginning. 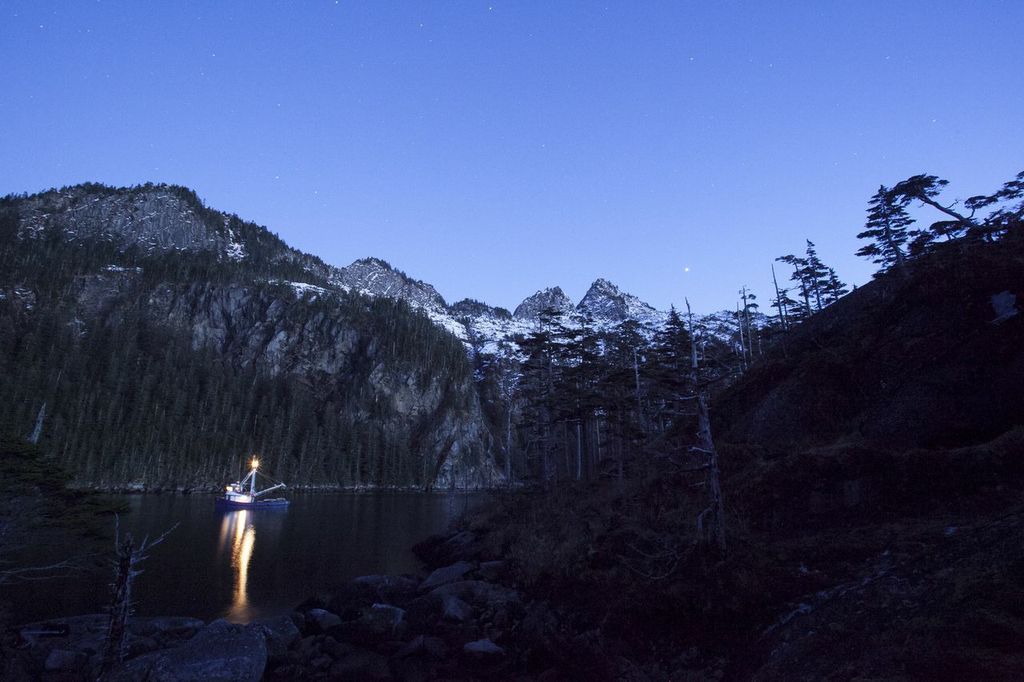 Alaska Sessions is a documentary-style and character-driven surf film. The surfers are not professional, but average surfers from various backgrounds and age ranges; all with different stories to tell. Give us a bit of a background on the crew and how you came to choose each surfer?

We didn’t actually get to do any choosing, they had already planned the trip and were just kind enough to invite us along. They are all from my hometown, Homer, Alaska, and have all known each other for years.

Captain Mike grew up in Hawaii and learned to surf there, but after moving to Alaska and starting a business and a family, he hadn’t been surfing for 25 years. I believe his family pitched in and bought him a surfboard and he got set up with a wetsuit, quit smoking, caught his first wave in 25 years and that’s when it all got out of hand. His wife Wendy isn’t one to discourage adventure either.

Ice Man is originally from Southern California, but he’s been surfing in Alaska for over 30 years. I don’t even know what he was wearing for a wetsuit back then, probably long johns. Wouldn’t have mattered though; he is the Ice Man. He and his wife, Donna Rae, love hunting and fishing, and in the summers, they have fields of potatoes and barn-sized greenhouses they are busy with.

Scott is my brother. He started surfing in Homer as a teenager. I think it was in a water skiing wetsuit with rubber gloves duck-taped on. He would, and still does, wait patiently for the right swell to bring waves, and then the rest of his life is put on hold till the surf dies out. He runs Surf Alaska now and is somewhat the go-to guy for anything surfing in Alaska. His wife, Stephanie, hasn’t been surfing long but definitely shares his passion. 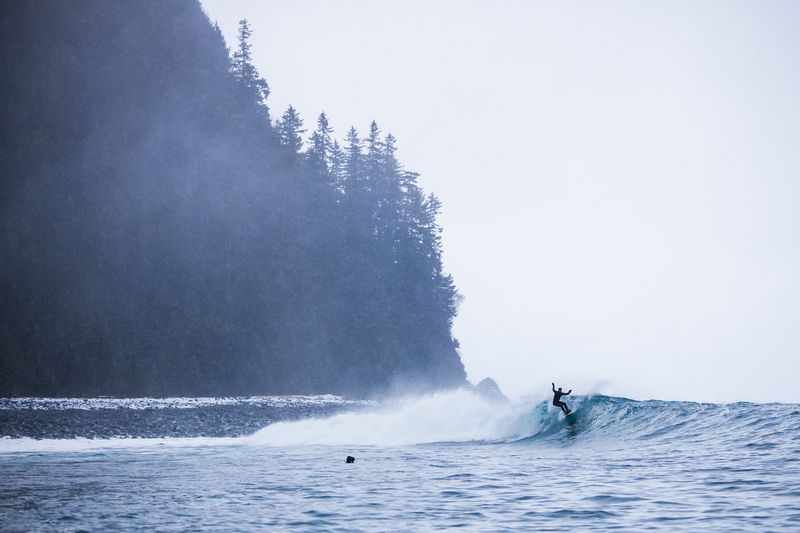 The “Milo” is the ship in which a good amount of this film is focused around, it was the traveling and lodging vessel for entire surf adventure. The “Milo” has an interesting story, can you tell us some of the details about the “Milo” and why it is such an integral part of the film?

The Milo was built to fish in Alaska in 1966. Apparently they didn’t have it finished for the first salmon season but went anyway, finishing what they could while travelling to the fishing grounds. After 40 years of fishing, it was decommissioned and set up to provide bio-generated power to larger ships. That business didn’t really work out and it was moved to San Francisco where it became the equivalent of a floating trailer home. Then Mike came along and they’ve been surfing together ever since. Mike says now and then he finds a commercial fisherman staring at his boat looking confused, wondering what kind of fishing his strange back deck might be set up for.

The Milo is kind of symbolic for the kind of life that Mike and other Alaskans choose. He could be settling down, taking tropical surf trips, but instead he is pouring his money and energy into this old steel fishing boat so he can go explore the Alaskan coastline. 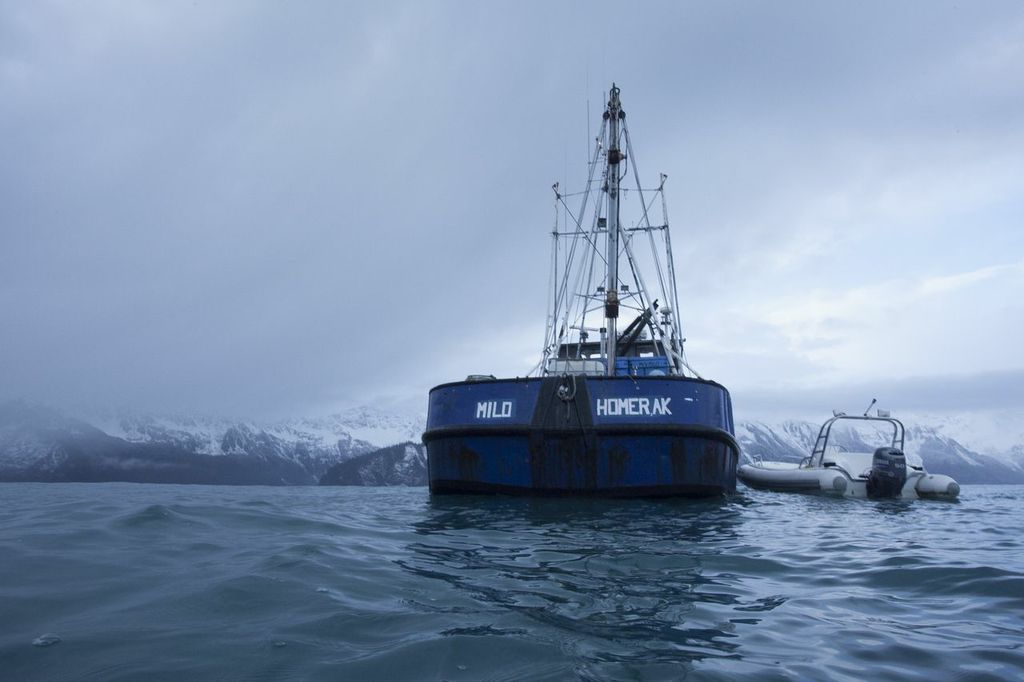 The total trip searching for, finding, and surfing waves in Alaska was about 6 weeks. The filming process was taking place for almost the entire trip and you had nearly one hundred hours of film to go through when it was time to edit. How did you narrow that footage down into what turned out to be about an hour and half long film?

Oh, by spending hundreds of hours editing. We initially just tried to organize things into rough scene categories and get rid of stuff that didn’t seem like it was going anywhere. We wanted to focus on the people, so we used some audio interviews we’d done and matched them to video scenes to tell that part of the story. The rest of the story was broken into chronological chapters. We left the beginning for last and used a fair bit of narration and animation to introduce the characters and set the scene. And then you review and refine until you just can’t bear to watch it anymore.

Now that the film is complete and it’s been entered in various film festivals, what reaction have you received and what are your further hopes for the film?

We wanted the film to represent some true Alaskans and give people a feel for what it is like living in Alaska without the hype that seems to be a part of a lot of Alaskan films. At the few screenings I have been able to make, the response has been very positive, at least the people I have heard from. It seems like surfers and non-surfers enjoy it equally well. We have had three sold out screenings at various festivals so far so that’s encouraging. We are planning to have the film available for download on iTunes by next year, followed by a limited DVD release. So hopefully that all works out well. 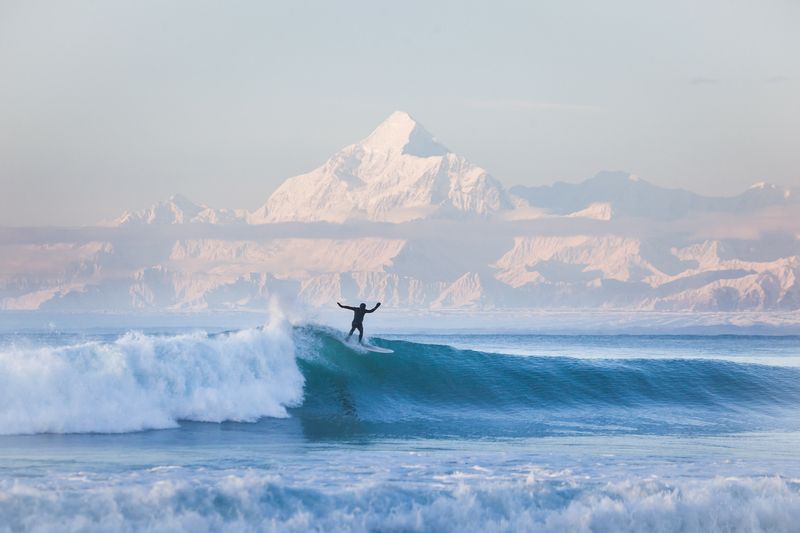 It seems the “Milo” is now the premier surf adventure vessel in Alaska. Did the film help that become a reality or was the original plan for the “Milo”?

After having watched the film, I think it is hard to see why you wouldn’t want to be on a trip with the Milo. I think Mike would have been taking it out surfing with the locals regardless, that guy just loves to catch waves. Since then, there have been a number of other notable personalities on board, so interest can only be building.

For surfers traveling to Alaska looking for surf, what would be some words of advice?

Definitely check out Mike’s business online, oceanswellventures.com. And my brother Scott’s website, surfalaska.net, has a lot of information too. 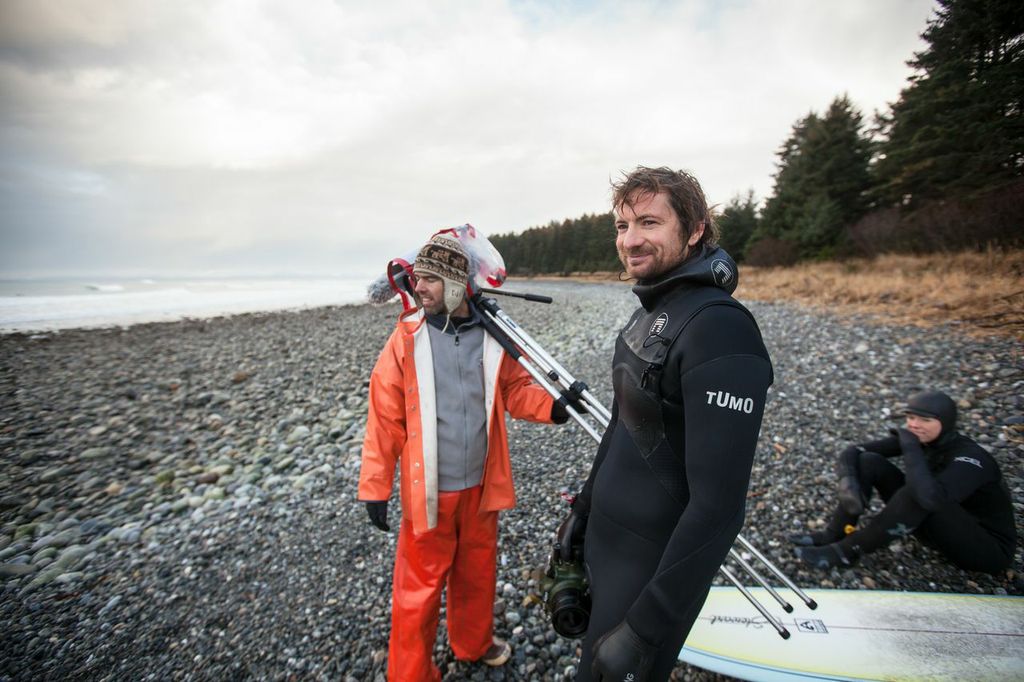 Now that “Alaska Sessions” is in post production mode, although I’m sure much of your energy is invested in the promotional process of the film, have you thought of your next big film project?

Yeah, this film project stuff does take a lot more work than I’d ever imagined, even after you finish editing. As far as a new film, there are always ideas and it’s a hard habit to kick. You learn so much each time from new skills and all the mistakes, and like most things you always want to go a little bigger on the next one.

I have learned so much with this film. We made lots if mistakes with our work flow, not having an idea of how we would finish everything. I could sure do a lot better next time. Testing the workflow from start to finish would have been a great idea. It is a bit addicting making films. I have a few ideas and once this one is more on its way, I might have time to think about the next one. 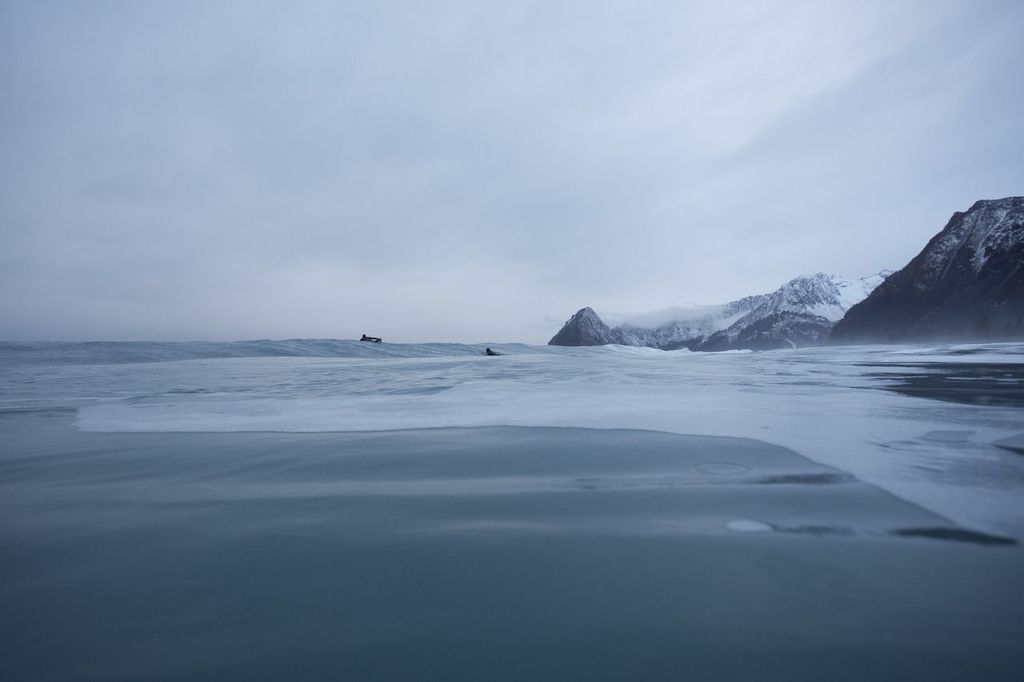 Any last thoughts, shout outs, thanks, or words of wisdom?

Thanks to the Crew of the Milo: Mike, Ice Man, Scott, Stephanie, Donna Rae and Wendy, oceanswellventures.com and surfalaska.net.

And thanks for letting us share about our film.